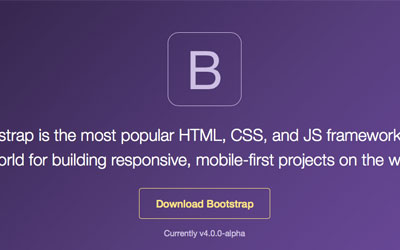 Bootstrap 4 is in alpha, news are exciting however it is still a long time to go till the final release. We have downloaded the first alpha version and we can't wait to build our first software for you on Bootstrap 4.

There is also a good news that Bootstrap 3 will be still supported even after the final release of Bootstrap 4.

Support for IE 8 and IOS 6 will be dropped plus there will be official support for Lolipop 5.0. Instead of pixels, Bootstrap 4 will using em for media queries. Thumbnails, wells and panels are removed and using just one class called card.

Justified Navs are removed and not replaced.

The following media queries will be used within Bootstrap 4:

The grid will luckely stay the same:

Again for us one of the best cms framework available and we are looking forward to build great software for you with Bootstrap 4 soon.

Push notifications are back, bug fixes and performance...

We program modern and fast web and mobile software, always responsive and mobile first! Not just great software also world class support, rated an average of 4.9 out of 5 stars! When you need support from us you will get it!

Feel free to contact us via our contact form at any time, we usually respond in less then 24 hours or start a chat conversation when we are online.